This trip was all for Mother’s Day and so I wanted to do things that my mother would enjoy.  She loves to go on bike rides for fun and exercise. So I decided to book us on a 3 hour bike tour with Free Wheelin’ Bike Tours ($50) that was just a few blocks from our hotel.  We went on the Queen of the South Tour which included a ride to Lafayette Square (my childhood home was in Lafayette Square in Los Angeles so it was significant to us), the garden district, warehouse district, and get some history of NOLA and Mardi Gras. Our tour guide was very knowledgeable and passionate about the history and it was a wonderful experience.  However, I cannot ride bikes very well because I am out of practice so it was a traumatic experience for about the first 30-45 minutes until I got the hang of it. (Ok, pretty much the entire 3 hours but I made it through!) My heart still races when I think about how terrified I was. But my mother was happy and we shared the memory together and that is all that matters.  Anything for mom! http://www.neworleansbiketour.com/index.html 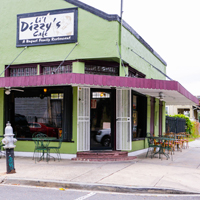 This was by far one of my favorite dining experiences! We got the recommendation from the bike tour guide that this place was where to go for some good southern food. There is nothing fancy about this restaurant located at 1500 Esplanade Ave on the corner.  This place closes at 2pm and there are very serious about that, even singing and counting down when 1pm hit. It is literally a hole in the wall place that is small but the food speaks for itself.  The customer service was amazing and you felt like you were visiting your Southern Grandma’s kitchen.

We did the brunch buffet ($15.99) which included an array of soulfood delights such as gumbo, grilled sausage, red beans and rice, shrimp stew (or Etouffee, we couldn’t tell the difference), fried chicken, salad bar, potato salad, and bread pudding. The highlights were the EVERYTHING!!!! The fried chicken was some of the best I’ve ever had, considering I made it the highlight picture. They took the time the season the batter and the meat, like I was taught, and it was delicious.  The chicken was hot, fresh, and the taste was as if they used fresh grease for each batch! Good stuff, my mouth waters as I type. It went quick and was replenished as needed.  Plus they had the Louisiana Hot Sauce on the table! It was perfection!! When we arrived, the chicken was all gone and when we asked about it, they said there would be chicken available until they closed. Awesome! The red beans were cooked with pork and bacon and were seasoned to perfection! I mean, I had to get two bowls. My mom and I don’t really do rice and to be honest, it wasn’t needed. The shrimp stew or Etouffee was amazing. At first we thought it was gumbo but there was not any veggies, seafood, or sausage in it. We are still confused as to what it was but it doesn’t matter! It was some good eating. I promise!

The Gumbo was tasty but a little different than what we were used to.  I’ve never had gumbo from a REAL creole restaurant so I’m not sure if they burn their roux differently than I am used to.  But it included a lot of sausage which made the soup look oily. But overall, I would have been satisfied with that as well.  The bread pudding is very popular but it was not my favorite because it included a banana flavor that I was not expecting. But in an UBER ride, the driver stated that he and his wife go there every Sunday and enjoy that bread pudding.  I think it just has to be your thing. I like my pudding with Bourbon and caramel. But that’s just me.  This was one of the highlights of my dining experience because it was no fluff and pretentious food here. This was the REAL DEAL! I highly recommended it!    http://lildizzyscafe.net/ 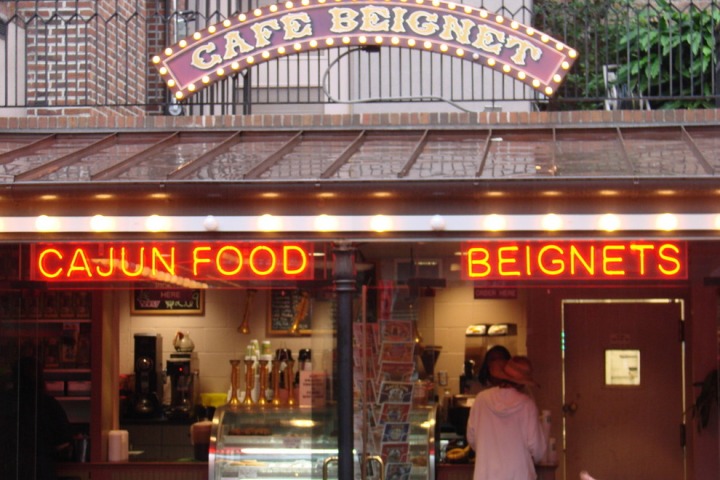 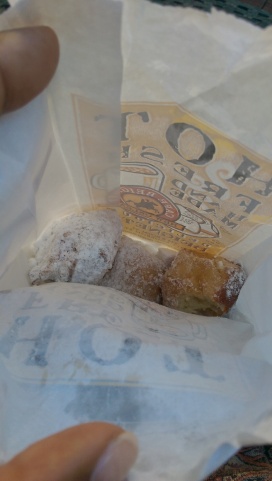 Located just across the street from my hotel on the Bourbon Street side. From the street, there is a courtyard area with a fountain and further back is the café where the beignets can be ordered. I was given this recommendation by the bike tour guide who spoke against the popular Café Du Monde. Beignets ($3) are always served piping hot and covered in powdered sugar.  These were good, when not compared to other places but having tried 2 other beignet locations, these are just ok. They are very dense and not and light as the others.  They were a decent size and flavorful but I can honestly say that I have had better. Very convenient though and line was very short. http://www.cafebeignet.com/

For dinner, my mother and I ventured down Bourbon Street to this popular Bourbon Street restaurant that literally went around the corner with indoor and outdoor seating available. The website says that they are located on St. Peter Street but the hostess table was all the way back on the Bourbon street side. I was annoyed that I had to walk all the back in a circle. Anyway, there was a 20-30 minute wait for a regular table but a few tables were available in the bar and my mother and I ended up eating there. 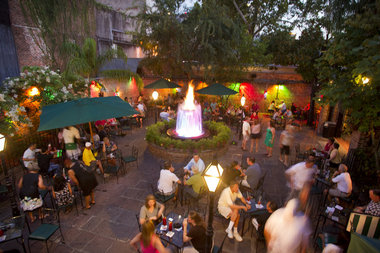 The customer service was interesting. The hostess people were a bit rude. There were about 4 of them there and when a table became available, they used the microphone to announce the name of the table over a loud speaker.  During my time there, they would laugh at the people’s names on the list and joke around. In the bar area before we were seated, we tried to order a drink from the waiter while we waited on our table and the waiter was like, you have to go to the bar to order because he does not get a tip. And was rather abrupt about it but we understood his position. He did say that we could order food from the table and it would be the same menu from the main restaurant and he would be happy to serve us. We ended up taking his advice and he turned out to be a lovely server.  We shared great conversation and he ended up giving us some commemorative green beans with Pat O’Brien’s name on them. 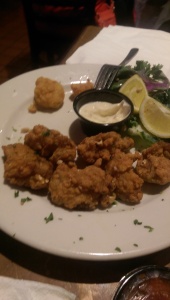 We ordered fried oysters as an appetizer. I was annoyed that they were served without any dipping sauce.  I asked the person who delivered the food to bring out tartar sauce and remoulade sauce but we never saw him again.  The appetizer came about a few minutes before our meal and since I ordered a fried shrimp platter, we used the sauce from my plate. The oysters were cooked well but nothing really special to report. They were just fried oysters on a plate with no sauce and some lemons.

For our entrée, my mom took the recommendation of the waiter and order the shrimp and grits and I ordered the fried shrimp platter with salad in lieu of the fries, seen below. I was underwhelmed with the shrimp though they were cooked perfectly. There was just nothing spectacular about the order. Just fried shrimp.  My plan was to put the shrimp on top of the lettuce and have a salad. Not sure what the disconnect was but the salad was delivered within 5 minutes of me placing the order but I wanted it to come out together. So I had to put the salad to the side for a while.  I requested their basil vinaigrette that was pretty tasty and bought the fried shrimp salad together nicely. 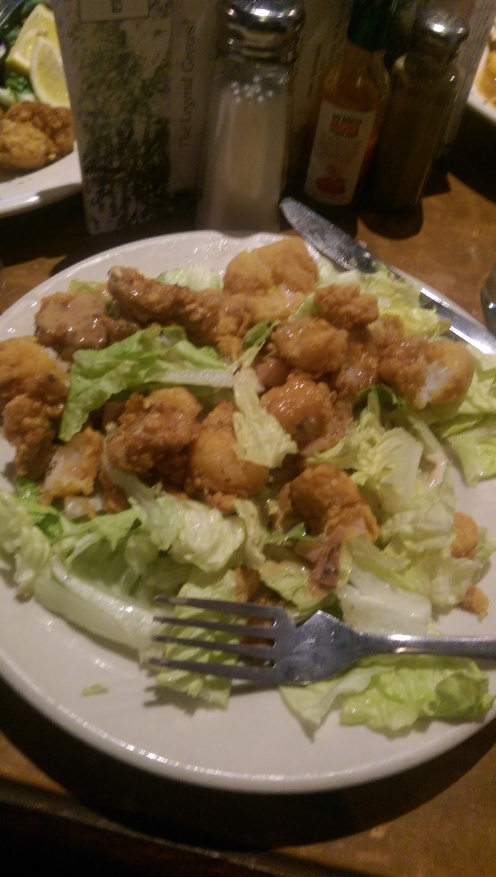 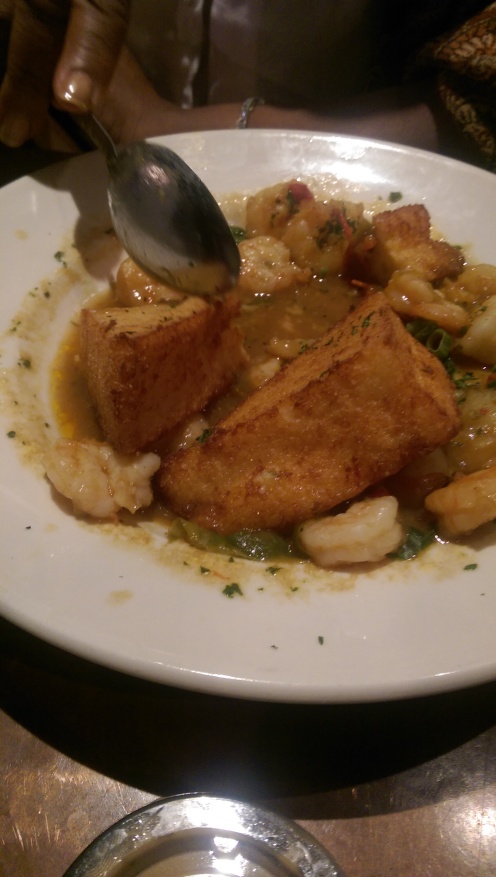 My mother’s shrimp and grits entrée was amazing and served as the highlight of our dinner. The shrimp were seared with red onions, sliced garlic, red and yellow peppers, and deglazed with French Brandy and simmered in espagnole sauce.  But the kicker here was that the grits were deep fried!! Who deep fries grits?? Pat O’Brien’s does.  The shrimp was topped with 2 deep fried cheesy grit wedges. They looked like a thick slice of cheese bread but when you cut into it, it was grits on the inside. Amazing! As my mother says, everybody has to have a gimmick and Pat’s would definitely be the fried girts. http://www.patobriens.com/patobriens/default.asp

Not sure if I would visit again. It was good but I just feel like there is better out there. However our waiter was very nice and I wish him all the best in life with his beautiful daughter that he shared a picture of when we bonded during our meal.

It was at this point where I realized I may have messed up on the restaurant choices.  And why didn’t I remember to go to an Emeril restaurant!!! I guess I need to go back ASAP and rectify this situation. Part III will talk about my Sunday adventures and conclude my trip!