Victoria Gastro Pub is located at 8201 Snowden River Parkway, Columbia, MD 21045.  When I moved to Maryland after college, I lived in Columbia, for 2 years in the 21045 zip code. I passed this restaurant all the time but never wanted to stop because I was dating a guy who had an ex-girlfriend of the same name.   I vowed I would not go there even if they were giving food away for free. I was anti all things named Victoria at the time. I was in my early 20s so please reserve judgment. When I saw this restaurant made it to the list, I smiled because things always come full circle.

I made my way there on a Friday evening for Happy Hour and dinner around 5:55pm. Traffic had been so terrible, it took me almost an hour to get there and I was starving once I arrived. It is located right off the Snowden River Parkway exit on Route 100 but going westbound, the exit has a traffic circle that really slows down traffic. I thought that coming from the other direction would be faster, I was wrong.

The parking lot was packed! I had to drive around the building twice to find a parking space. When I entered the restaurant, the bar area was also crowded. It was loud and full of professionals that wanted to end their week with good food and drinks. Luckily, I found a seat at the bar and soon after I noticed that a lot of people started to clear out. From my review of the website, they served free hors d’oeuvres between 6-7pm Monday-Friday. They are literally giving free food away! Mysteriously people were leaving right before the free hors d’oeuvres part of the evening beginning at 6pm. After a quick look at the happy hour menu, I ordered a glass of the house red wine for $5.95.

Many people who rave about this restaurant really enjoy their brunch menu. I have frequented Eggspectation across the street from this restaurant and never really gave it a chance. The review of the restaurant mentioned burgers, duck fat fries, Arctic char with lemon couscous and roasted-pepper vinaigrette, and the warm frisee and baby spinach salad with smoked duck confit, bacon, blue cheese, poached egg, and Dijon vinaigrette.  My review of the menu earlier in the day did not lead me to anything exciting on the entrée side other than the flat iron steak. So I decided to stick with the appetizers this evening. Plus, what I wanted to order on the appetizer side would be too heavy for a full entrée since I was dining alone.

I ordered the Fried Crawfish Etouffee ($8) served with creole mustard and a small Poutine ($10) which consisted of duck fat fries, duck confit, gruyere cheese, and duck gravy.  I’ve always wanted to try Poutine which is a Canadian dish made with French fries and cheese curds topped with a light brown gravy, so I went for it today. Both orders came out together, after a rather lengthy wait, and what I noticed first was the presentation of the Etouffee. The order was of 3 breaded balls plated on top of the creole mustard with scallions and green sauce sprinkled around the plate. I took a bite into the ball and tasted all of the creole flavors that the chef was trying to achieve. The green sauce included garlic and butter was quite flavorful. But I just did not understand the overall concept of the dish itself. It was seasoned rice, almost like a jambalaya with crawfish that had been rolled into a ball and fried. I feel that same way that I feel about fried mac and cheese or a pasta bread bowl….why? Sure it is creative and all of those things, but it was just too much. I ended up opening the ball and eating the crawfish and rice out of it. Very tasty though. 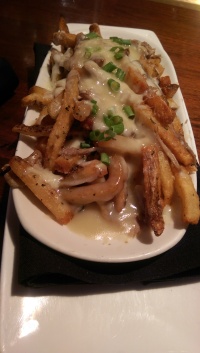 The poutine had so much potential to be amazing but was missing a few spices. Duck fat fries are delicious on their own. They are truly a treat I would recommend. I love duck so putting pieces on duck on top of fries seems like it would be a winner. I love gruyere cheese so I cannot imagine that wouldn’t enhance the dish and who does not love a little gravy. But altogether, this dish did not come through as I wanted it to. It was quite bland to me. Perhaps a bit more salt would have taken it to the next level and a few other spices. It was definitely good but it was not great.

By the time I finished my first two appetizers, it was roughly 6:30pm and there had not been any free hors d’oeuvres passed around. I was starting to think it was all a fluke until a waiter arrived behind me with Truffle popcorn. The picture below may not look like much but they were delicious.  The seasoning was not too overpowering and flavors were tasty. I would not think to order popcorn at a restaurant but it definitely worked. During my next order, another server arrived with a platter of fried zucchini fries. The fries were good as well as the dipping sauce but did not stand out to me like the popcorn. The lady next to me ordered the lobster grilled cheese and fries that I quickly snapped a picture of. I’ve had this before and while it seems like an awesome idea, this is not were lobster is meant to me. And from the photo, my opinion still stands.

As my main dish, I ordered the Prince Edward Island Mussels ($13.00) with Ommegang Witte (beer), garlic, cilantro, orange peel, and chili de arbol. The dish was piled high of mussels and several pieces of grilled bread slices. The highlight of this dish was the bread. They buttered and seasoned these sliced to perfection. I only had one piece but that was very difficult to do. When you order mussels at a restaurant, unless the mussels are have gone bad or a large number of them are served closed, there is really nothing to assess here. You either like mussels or you don’t. What makes a mussels order is the broth! And I was not impressed. We are supposed to be talking about one of Baltimore’s 50 Best restaurants and the mussels broth is bland? I’ve never had the orange peel addition to the broth for added citrus flavor and I appreciate the originality but it did nothing for me but add an intense citrus flavor the bites I had that included it. I tried to make it work by dipping the well-seasoned bread in the broth but it still did not help it. It was good but it was not great. I ended up eating the mussels and leaving the broth behind. 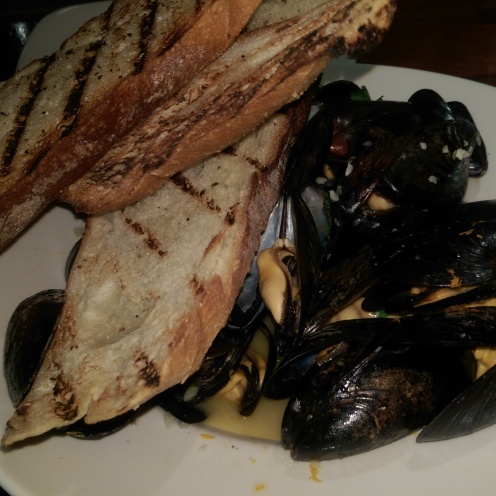 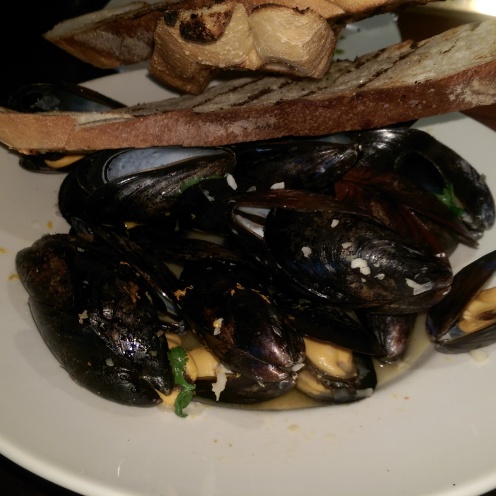 The dessert menu did not impress me either. They had classics with their added twist on things but since I was so unimpressed with what I had already ordered, I did not want to take that risk. I decided to just eat Chocolate-covered frozen bananas pieces at home from Trader Joes. My tried and trusted dessert option. My meal totaled $39.35 and after a 20% tip totaled $47.35.

Overall, I had a nice experience but it would be a while before I returned. And I probably would need to return for brunch with someone really enthusiastic about it. However, that bread from the mussels was amazing! I loved it. I came in here with high expectations that were shattered by bland food. And what bothers me more is that, this is on the list as the best. And I’ve gone to other restaurants in the area that could have easily outshined this place. Maybe their intensive 16 page beer menu led to be impressive and landed them on the list that way. Or maybe the fact that if you really like the beer you had, you can order a 64 ounce jug of it to take home with you.  Everyone seems to love it, but not me. Below is my Seven Mac Score:

Please look out for my next post as I review another one of Baltimore’s Best and share my weekend experience at the Taste of Three Cities Food Truck event! Also, you can find me on Instagram @finediningdiva and twitter @moderndaybeauty. Also, if you would like to follow my blog to receive notification when a new blog is posted, please send your email to finediningdiva@gmail.com.