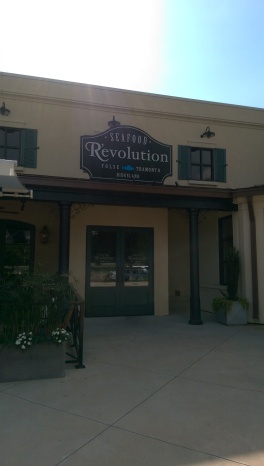 After my delicious Parlor Market experience, I decided to venture off for some fine dining at the Seafood R’evolution located at 1000 Highland Colony Pkwy, Ridgeland, MS 39157 in the Colony Shopping Center. This restaurant was conveniently located in the outdoor shopping mall across from my hotel. The restaurant’s exterior includes a blue and white striped awning that was similar to the colors and awning at the Commander’s Palace in the Garden District of NOLA. Seafood R’evolution is a classy restaurant offering a modern take on Southern seafood dishes fresh from the gulf coast to create a unique dining experience in Mississippi. 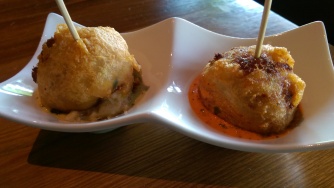 While there were drink specials for their Happy Hour, I decided to go with my usual Sparkling water and lime combination. I planned to exercise again this evening so I wanted to order a lighter meal and take a salad for later. They had a happy hour which included food so I decided to order the Beer-battered Crab Beignets ($5) which included two different remoulades. It should be noted that the regular price of this dish is $18 and includes four crab beignets and different remoulades. However, I got half the order for less than half of the price. So I think the appetizer’s regular cost is a bit over-priced. The prices of restaurant seemed to be a point of contention for other locals but they all said that they serve exceptional food. But the crab beignets were fantastic. They were like fluffy balls that include crab, probably cream cheese, and a few other seasonings. Both of the two crab beignets were presented in a different remoulade but my favorite was the yellow version that added an extra something special to the flavors already included in the crab beignet. 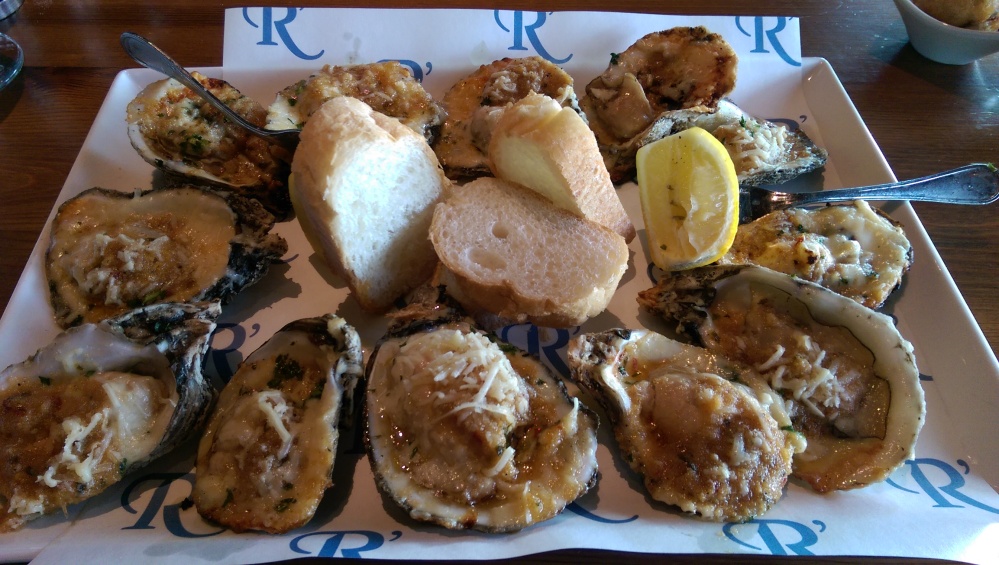 Next, I ordered a dozen Charbroiled Oysters ($25) to see how they matched up with my Drago’s experience from the night before. I was annoyed that it was over $2 per oyster and was curious why they were more expensive than Drago’s for the same dish. I could have sworn that the price was cheaper on the written menu at $22 but my receipt and the online menu list $25, so we will stick with that. R’evolution’s oysters included clarified butter, garlic, and lemon herb. The presentation of the oysters were not as messy as the Drago’s plate but not in the best way.  There was nothing for the bread to sop up. The oysters were flavorful and the cheese added a wonderful flavor enhancement. But the dish tasted more like baked oysters than charbroiled. There was not enough smokiness to the dish and it did not pair well with the fresh lemon as the other oysters did. I used the bread to sop up whatever I missed from the shell after I ate the oyster but there was a definitely lack of sauce there. I was not all that disappointed and I would not pay to order the oysters again from here when Drago’s is so close and prepare them to perfection. 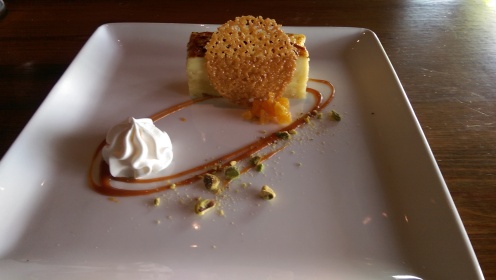 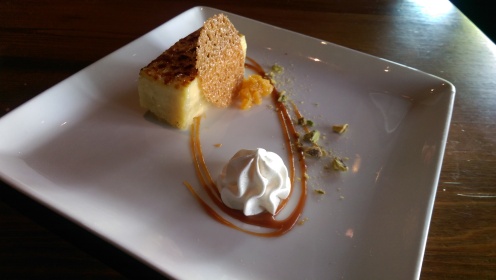 I was feeling a bit sweet today so I decided to order the White Chocolate Bread Pudding Crème Brulee ($9) with the salted Bourbon Carmel Sauce. The presentation of this dish alone was spectacular. It came out with a the Bourbon Carmel sauce circled on the bottom of the plate, pieces of pistachios, a dollop of whipped cream, a decorative wheel that had similar flavors of the dessert and was sweet, and a rectangle slice of the bread pudding Crème Brulee that with the caramelized sugar on top. This is by far one of the best desserts I’ve ever tasted. I enjoy crème brulee and breading pudding individually and the combination of them together was amazing. The combo was rich, sweet, creamy, and everything you would want from dessert. The presentation was fantastic and almost too pretty to eat though I’m glad I did. I could definitely go back for another round of this dessert. 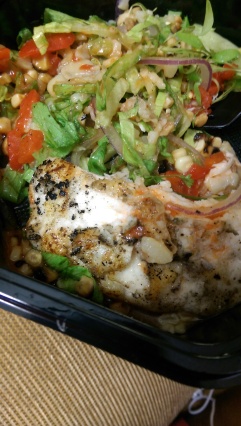 Based on a recommendation from my server, I ordered the Delacata Catfish Chopped Salad ($14) which include fire-grilled catfish, shredded iceberg lettuce and romaine lettuce, red onions, charred corn, and a roasted red pepper vinaigrette. This was not listed on the online menu so I did not see it ahead of time. I mentioned to the server that the dish would be eaten a few hours later and this was the one she recommended. Unfortunately, the catfish was placed on the salad hot and when I opened it later, the lettuce had wilted and the vinaigrette had cooked a bit. It was a good salad overall but it was hard to determine if I like it or not because it was not fresh. Maybe the catfish should have been put in a separate container. The catfish itself was flavorful but it was a bit tough in the thicker areas that means that it was lightly undercooked. The vinaigrette was a bit bitter but could have been different without the additional heat.

Overall, I had a pleasurable dining experience that I would for sure love to try again, especially during the Happy Hour time for the discounts. I stopped by the bathroom on the way out and noticed they had about 6 separate bathrooms with 3 for women and 3 for men. Two of them were closed off for repairs. The first bathroom I opened was messy and needed to be refreshed. My little bathroom stall was decent but needed a fresher aroma. They seem to spend a lot of time perfecting the dining rooms and basically neglected the restrooms. I spent a total of $63.72 and after a 20% tip, paid $75. The following is my Seven Mac Score for the restaurant:

Please look out for my next post as I share more of my week in Jackson, Mississippi in my Jackson, Mississippi Food Diaries! Also, you can find me on Instagram @finediningdiva and twitter @moderndaybeauty. Also, if you would like to follow my blog to receive notification when a new blog is posted, please send your email to finediningdiva@gmail.com.