The same friend who introduced me to Hot and Juicy Crawfish also introduced me to Chasin’ Tails! She loves crawfish and I love her for it! She has tried to get me to go to this restaurant before but it is located in Arlington, VA which is a bit of drive from Baltimore so I usually pass. However, this Saturday led me to near her home for a family visit and I drove to her house and she drove to the restaurant. Win!

Chasin’ Tails is located at 2200 Westmoreland Street, Arlington, VA 22213. There are lots of amble parking located in the garage and on the street. It is the same concept of Hot and Juicy Crawfish which is Cajun-style seafood dishes and boiled crawfish and/or seafood served in a bag with corn and potatoes.  There are different spice levels and sauces to choose from but after my prior experience, I decided to stick with the mild.

My friends really enjoy their Fish Bowl drink selection here so one started with a Starburst ($10) cocktail and the Strawberry Coronita ($13) which was basically a strawberry margarita with a small Corona bottle in the bowl.  This was where the first issue with the server began. She got the Strawberry Coronita wrong and when the server brought it out, they were not sure what exactly my friend asked for and requested to see the menu.  After it was all settled, they brought her the right drink and we moved forward. I saw they had beignets for dessert so I wanted to save my sugar for dessert but still needed the bubbles for the meal so I ordered a bottle of Angry Orchard Crisp Apple Cider beer ($6). 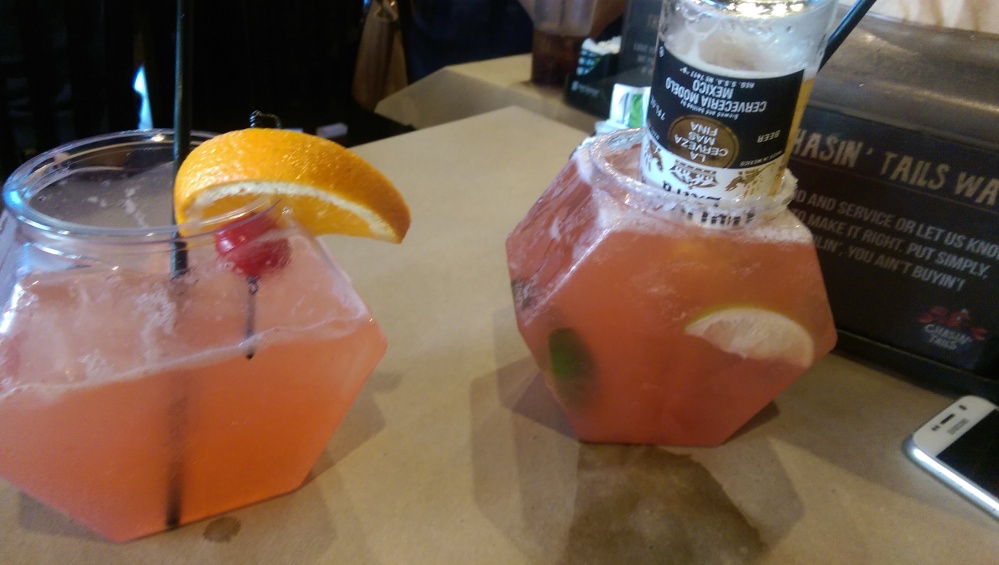 Next, my friend ordered the Fried Green Tomatoes ($6) as an appetizer and the other ordered Creole Jambalaya ($9) for hers. The fried green tomatoes were served with two sauces and a generous portion of fried tomato slices.  Unfortunately, my friend was not impressed with her appetizer. She took her first bite and was disappointed.  I decided to give it a try fully expecting not to like it because of my dislike of tomatoes but it was actually pretty good with the sauce. I don’t think that I would have the whole order but the little bit I tried was not horrible.  However, my friend sent it back which the server kindly removed.  My friend’s Jambalaya did not arrive until when the seafood orders came which was a bit disappointing. However, she enjoyed it and the favors of the dish were pretty good.  I also enjoyed a small bite and the flavors were quite good but when I cook it, I prefer mine with with a little more spice and seafood.

I ordered the lobster ($33) in the bag with mild “Oh Dang!” sauce. The “Oh Dang!” is a mixture of the original Cajun, garlic-butter, and lemon pepper sauce styles.  It was definitely flavorful but not as much spice and seasoning as I wanted.  However, what I appreciate is that for each pound of seafood you buy, you get 2 half corns and potatoes in the bag. And for every 2 pounds of the same seafood, you also get an order of the Andouille sausage. The lobster was a pound and a half of yummy goodness.  I liked that it was $33 flat and not per pound like at Hot and Juicy and it also included the corn and potatoes.  I requested double corn and no potatoes but at the end, the receipt for my order included an additional corn charge that I had to dispute and have removed. The lobster was cooked to perfection and the seasonings really bought out the flavor! It was the whole lobster and the chef included indentions in the shell to help me dig in which was also helpful.  The corn was sweet and had a crunch unlike the overcooked stuff I’m used to at my other spot. What was odd is that I ordered a ½ pound of Andouille sausage ($6) which I thought would be included in the bag with the seafood but was served in a bowl on the side. I specifically requested that it be included in the bag but those instructions were not understood. Customer service was definitely lacking here. However, that lobster was filling and delicious! Great price! I would definitely order that again and maybe the market price will be cheaper next time.

One friend order a pound of crawfish ($12) with corn and potatoes in the “Oh Dang” medium and ½ pound of sausage ($6). She generally enjoys spicy food but found that when it is too hot, you cannot enjoy the seasonings. She enjoyed her meal but took most of it home after getting full from the jambalaya and trying to save room for dessert. My other friend ordered a cluster of snow crab legs (market price but $24 that day), corn, and potatoes with the medium “Oh Dang” sauce. She too enjoyed her meal and had a little left over for later. I just think lobster does not make the best leftover so I wanted to just finish my meal there. 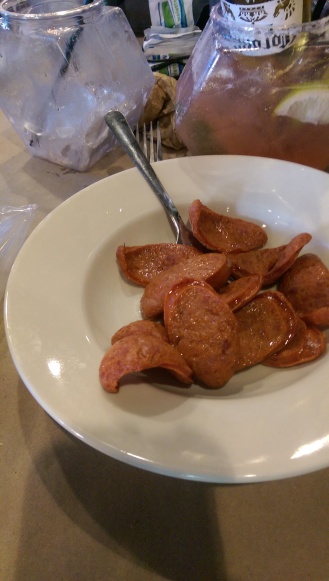 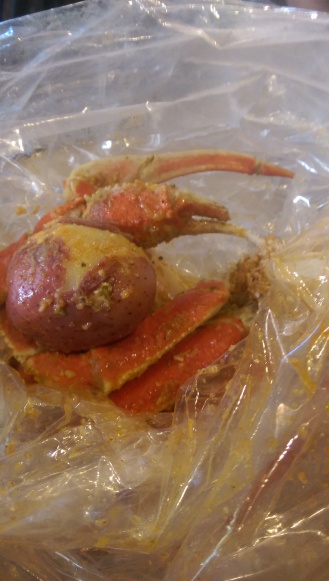 My friend and I decided to split an order of Beignets ($6.50/$3.25 split) which was served with a strawberry sauce. The order was a total of 5 beignets that had a nice dusting of powdered sugar. They were served piping hot and the strawberry sauce was a welcomed addition to the dessert. This was definitely a highlight of the meal! I would definitely order these again.  While they may not be as great as they are in NOLA, it is easier than traveling down there!

Overall, I had a wonderful experience at Chasin’ Tails and I am plotting to get back down there.  I usually would have order shrimp and mussels but I was really wanting lobster that day but my friend warned me that the shrimp are a bit smaller there. I wish the seasoning was a little more flavorful but the prices were reasonable and the experience was definitely worth it! I spent a total of $53.08 and after tip $63.08. They will definitely see me again when I find myself nearby or my friend wants to drive us. The following is my Seven Mac Score for the restaurant:

Please look out for my next post as I review another one of Baltimore’s Best and make my way around the DMV area! Also, you can find me on Instagram @finediningdiva and twitter @moderndaybeauty. Also, if you would like to follow my blog to receive notification when a new blog is posted, please send your email to finediningdiva@gmail.com.