It is Baltimore Restaurant Week!!! For a foodie such as myself, this is a pretty big deal! Over 30 Baltimore restaurants participate in this event in an effort to get customers into their restaurants during a high travel season that may not have visited otherwise. Restaurants post a three course dinner menu for $35 or a two course lunch or brunch selection for $25. The deal is fantastic though if you go to a restaurant that you frequently visit, like me at Fogo De Chao, you may be disappointed to learn that your favorites are not included in the discounted-specialized menu. However, this year, this was a huge help with my 2016 challenge as many of these restaurants are pricey.

A coworker and I agreed to meet up on Saturday at one of Baltimore’s Best at 7pm.  Luckily, Jack’s Bistro was able to accommodate our reservation time. After several attempts to confirm our evening, I called my friend only to learn that she had made other plans. (I’m writing this because she reads the blog and I’m wondering if she will know this is about her). I was quite disappointed because Jack’s Bistro menu looked fantastic! Luckily for me, another friend was available and agreed to meet me but needed a bit more time.  I contacted the restaurant but since they do not open until 5pm, no one answered the phone. Around 4pm, I got a text confirming the reservation and was able to push back the reservation to 8:30pm. I certainly appreciate their flexibility! 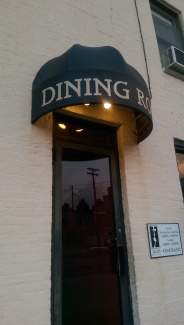 Jack’s Bistro is an innovative American Cuisine restaurant which menus that change often.  They consider themselves as Baltimore’s first sous vide restaurant having opened in 2008.  (Sous-vide is a method of cooking in which food is sealed in airtight plastic bags then placed in a water bath or in a temperature-controlled steam environment for longer than normal cooking times like 96 hours). We pulled up to the restaurant located at 3123 Elliott Street, Baltimore, MD 21224 around 8:15pm.  The restaurant is located in a residential area with only street parking available and we were able to find a space right away which was a plus! A group of people were outside waiting, and said they were late to their reservation and we would probably have to wait as well.  I decided to check in and see for myself. I entered the door under the awning labeled Dining Room and entered another small Baltimore restaurant. Because Baltimore is an older city, many of the buildings are small and intimate. The hostess was welcoming and sat us right away in the back table, by the kitchen. There were not many tables to choose from and I was just happy that we were seated so quickly but I generally do not like to be in the back by the kitchen.

I was not sure if they were trying to set a mood or what their idea was, but the lighting was really low, like dark. I’m have excellent eye sight and even I had to take out my cell phone flash light to read the menu. Later in the dinner, we learned that the overhead light bulbs had all gone out and the hostess was able to change a few of them and add some much needed light to our area. The special menu had a lot to offer for the great price.  Both of our meals were supposed to be $35 but additions to the meal could make it higher. I ordered a Red Sangria $7 after learning that the restaurant no longer serves sparkling water. That is a huge disappointment and the sangria did not do much for me either. My friend ordered a coke ($2.50).

To start, I ordered the Spicy Somboon Style New Zealand Green Lip Mussels (usually $9) served with soy, lime juice, mint, fish sauce, shallots, garlic, lemongrass, jalapeno, cilantro, and basil.  The mussels were served without the shell and came in an order of 6 topped with so many green herbs, it looked more like a salad than a mussel dish. However, one bite of the mussels with the herbs and jalapenos with the combination of the citrus sauce, it was amazing! Usually, mussels are served in a butter/oil or cream based broth that can sometimes have tomatoes or wine but this was an amazingly creative way to reinvent the dish. The citrus flavors with the sauce and the combination of the herbs was spectacular.  This type of creativity makes you an amazing restaurant!

My friend ordered the House Salad made with blue cheese, tomatoes, olives, and a vinaigrette.  I cannot find this on the website or the special week menu online so maybe this was a Saturday special.  However, of all the great looking Starters, I was curious about why she ordered a salad.  She originally asked for the blue cheese to be omitted from the salad and the server came back and said that there were no omissions on the Restaurant Week menu items, which was listed on the website. She decided to stick with it and eat around it but did not enjoy the salad at all.  And to be fair, the presentation was a bit lackluster also.  I am under the impression that the salad was premade and was just put on a plate when ordered. So it was not prepared fresh to order which is understandable given the circumstance but a bit frustrating nonetheless. She is not off to a great start.

For the second course, I ordered the Guinness Braised Filet Mignon (usually $27.75) served with a demi-glace, grilled French green beans, smoked Gouda, jalapeno, and bacon grits. This dish was an additional $8 taking my $35 meal to $43.16.  They added $0.16 to the meals which was interesting but not enough to make a fuss over. I really do not know what to expect regarding my meal. Filet Mignon, grits, smoked Gouda cheese, how does that come together exactly? Well, it comes together beautifully!!! The filet mignon was a generous thick cut portion of meat that was covered the demi-glace sauce that was not too salty but just the right amount of added flavor. The French green beans were a beautiful green color lightly seasoned and the sauce added to them as well.  The bacon grits included the Gouda cheese and jalapeno! It was a creative way to recreate a meat and potatoes dish! I was so happy!! The meat was prepared to perfection cooked Medium and was still very tender and flavorful! This dish was a bit more expensive because it is considered the Chef’s signature dish and I can truly understand why! 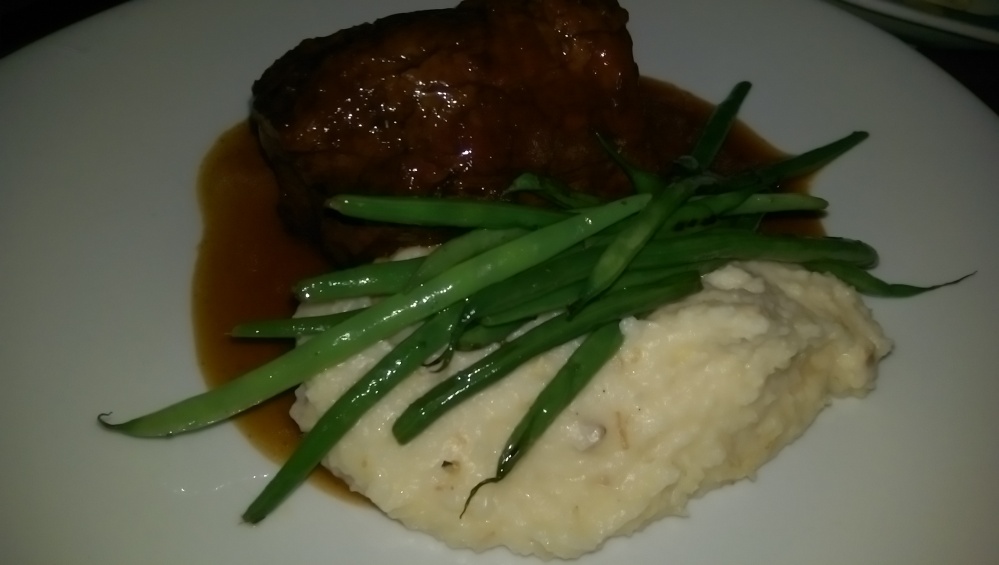 My friend’s second course was the Bistro Crab cake (usually $20.25) served with Dijon horseradish sauce, pasta shrimp salad (cold), roasted Brussel sprouts, mascarpone cheese, roasted pepper, and pickled onion. My friend is a little of a picky eater and did not want her Brussel sprouts but they were amazing!!! They were roasted with Truffle oil and salt that gave it a butter flavor that was fantastic!!! The pasta salad is not included in the regular menu and my friend enjoyed the salad but felt was a bit out of place since it was served cold which was a bit unexpected. However, it was flavorful nonetheless.  The star of the meal was the crab cake, and we would hope so! She raved that the crab cake had little to no filler and the crab was plentiful in the dish.  The presentation of the dish was a tad bit elementary as it was served in the plate that was divided into sections so nothing would touch.  Weird but creative. 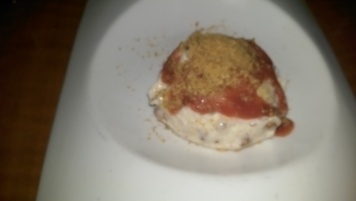 Finally, we ended our meal with the dessert course which was included in the price. I ordered the Apple Cinnamon Bread Pudding and she ordered the Fried S’more dessert. The prices of the desserts are not listed but the Fried S’more is the only dessert on the regular menu! Once it was time for dessert, my waiter informed me that they ran out of the Bread Pudding and highly recommended the Apple Cinnamon Cheesecake served with a graham cracker crumble and Morello cherry sauce. I was bummed because I am very picky about my cheesecakes! I am a fan the Cheesecake Factory cheesecakes because they have the right about of sugar added, the flavors are amazing, and the firmness of the cake with the crust (I generally go for the Key Lime or the Strawberry if you were wondering). Anyway, I felt pressured and I ordered it on impulse. And I was instantly disappointed when it arrived. The cheesecake was served in a small circler cake with a graham cracker crumble, not a crust.  The cheesecake itself was soft and not firm like I prefer and included apple chunks with cinnamon. It was ok flavor-wise but once I saw the Fried S’more dessert, I instantly regretted my decision.

The Fried S’more included a graham cracker encrusted chocolate marshmallow cookie, dark chocolate sauce, and chocolate ice cream.  I thought I would be turned off by the dark chocolate sauce but it was not bitter as I was expecting, it was delicious!! The marshmallow was fried with this chocolate crust that was awesome but needed more of a fork as knife to eat rather than the spoon. The chocolate ice cream was flavorful but came out soft and starting the melt. However, it was a great dish for chocolate lovers that I would definitely go back and enjoy this dessert and my first two entrees. My friend loved this dessert and felt like her last two courses were her best.

Overall, I truly enjoyed my dinner and I cannot wait to visit the restaurant again.  During our meal, we sat by a lovely couple and they too enjoyed the restaurant though the wife was disappointed because the special menu only included one vegetarian dish.  The husband enjoyed his meal.  We had both gotten the mussels as the starter and raved about them! But we both agreed that the food was amazing and the regular dessert was awesome! My friend and I spent a total of $93.30 and I spent $63.38 after a $10 tip! I certainly think the customer service could be improved but again, I will take into consideration that it was restaurant week and things are a little different on a regular night. However, none of that is enough to keep me away from another visit. The following is my Seven Mac Score for the restaurant:

Please look out for my next post as I review another one of Baltimore’s Best during Restaurant Week and make my way around the DMV area! Also, you can find me on Instagram @finediningdiva and twitter @moderndaybeauty. Also, if you would like to follow my blog to receive notification when a new blog is posted, please send your email to finediningdiva@gmail.com.