I was looking for another restaurant to tackle for restaurant week and I found my way to Bookmaker Cocktail Club’s menu.  They had an excellent selection of dishes that I wanted to try and I’d never been to Federal Hill before from what I could remember so I decided to give them a try. Federal Hill is located on the other side of Camden Yards and M&T Bank Stadium so getting there can be painful during a game or concert. Bookmakers is an inviting cocktail and dining experience with a huge glowing bar, plush furniture given the vibe of a modern space similar to that of a den or study.  This restaurant has a modern take on Southern dishes and is guaranteed to fill your stomach!

The restaurant is located at 31 East Cross Street, Baltimore MD 21230 directly across the street from the Cross Street Market. It is located on a narrow road and a bit hard to find because there isn’t a huge sign for the restaurant. Once you find it, it is pretty easy to spot it.  Parking is a bit tough because of its location and after circling the block twice, I decided to park in the lot directly behind the restaurant.  Unfortunately, they do no validate that lot.  Apparently, parking is $10 up front at the corner of Cross St and S. Charles St, which is reimbursed on the final check when the ticket it presented to the staff during the weekends.  The hostess informed me that no validation is done for the weekdays. Maybe she misspoke but that was pretty annoying nonetheless. However, I did not know this upfront so I was pretty annoyed having to pay $6 for parking.

It was a bit dark in the restaurant which made for a challenge taking photos discreetly.  I made a reservation for one but was seated at the bar which was not very busy when I sat down but filled up during the course of my meal.  There were not very many low tables in the restaurant and an abundance of long high tables with bar stools.  I am generally not a fan of bar stools, which is why I prefer a table, but these stools were actually quite comfortable.  After looking at the variety of cocktail options, I decided not to order a cocktail and focus my efforts on the food.  They also had fire flamed drinks which was pretty cool to watch to toast the cinnamon. However, for a Whiskey drinker, this was definitely a place to try a number of different Whiskeys. Not my thing but enjoy.

From the $35 restaurant week menu, I ordered the Pork Belly appetizer (usually $14), Picnic Fried Chicken (Usually $22), and Peach Cobbler (usually $8).  However, the menu also included a few extra items and I spotted my favorite Brussel sprouts ($8) so I decided to add that to my first course.  I tried to order my usual sparkling water but that was not available. I was a little bummed and I stuck with lemon water for my meal.

It took a little while for the dishes to come out but when they arrived, it was magical.  First to arrive was the pork belly served in a BBQ glaze with Napa cabbage slaw.  The plate include three pretty generous chunks of pork belly served on top of the delicious cabbage slaw. My first 2 pieces of the pork belly were the perfect balance of meat and fat and the bbq glaze gave me the feeling that I was eating delicious pork ribs.  It was awesome.  The third chunk was still delicious but had a huge chunk of fat that I had to avoid.  The cabbage slaw accompanied the pork belly so well.  I could have been satisfied with just this dish alone. 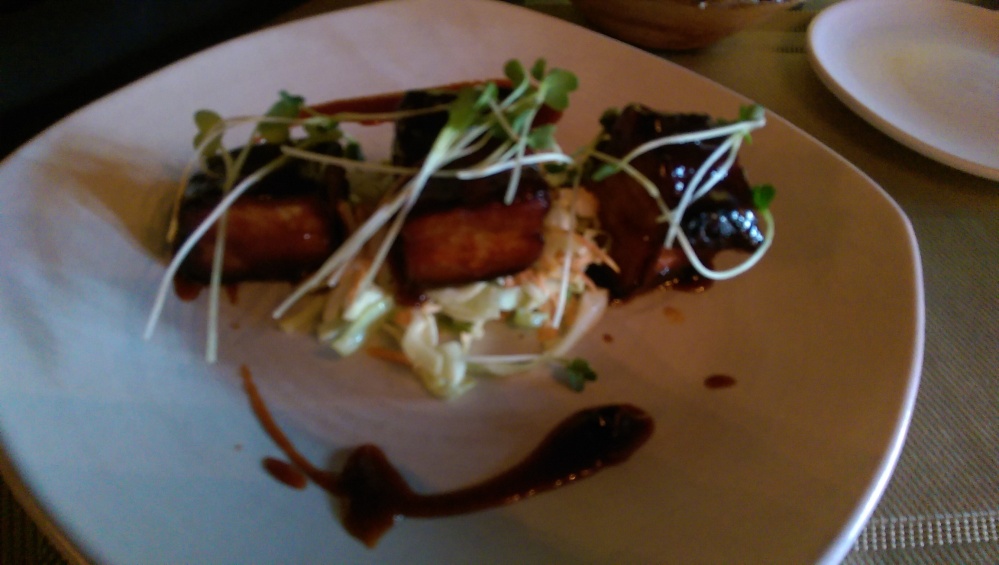 In addition, I also order the Brussel sprouts.  What a delicious addition that was!  Served with candied bacon and Parmesan cheese, these sprouts were excellently seasoned and cooked.  These Baltimore spots have their own unique way of preparing these sprouts and each one had been spectacular! What a treat. There were a bit oily but I did not even care. It was such a generous portion that I had to take them home and they made an even better leftover!!! I will literally go back to this restaurant for these Brussel sprouts alone. Now on to the main course.

It took a while for the next course to arrive. I thought maybe it was because it was fried chicken but even the dessert had a long wait.  When the Picnic Fried chicken arrived, it served on a huge plate with lots of colorful additions.  There was red from the roasted red pepper hot sauce and slice of grilled watermelon, yellow from the corn on the cob, pink from the radishes, and green from the springs on the plate.  Southern food typically lacks a lot of colors on the plate so this really livened up the dish.  The meal included a chicken leg and chicken breast, young potato salad, and the small plate include the house biscuit with warm peach jam.  There was a lot going on with the presentation but it definitely reminded me of a picnic so I see what they were aiming for.

I was pretty much full from the first course but I was determined to try at least the chicken leg and a few bites of the other things. The batter of the fried chicken was crunchy and very well seasoned.  The chicken itself was moist and delicious.  I had not complaints.  The hot sauce that was poured along the side of the plate was creative and good, but it was a bit hard to eat because it was not served in a bowl.  I basically had to take a piece of chicken and wipe the plate to get the sauce.  The potato salad was under the pretty large chicken breast that I took home for later.  The potato salad was just ok.  Nothing spectacular.  The potatoes were not cut into small mouth-size pieces so you either had to cut it yourself or you just had this huge piece of potato in your mouth. The rest of the plate was just ok.  The grilled watermelon that appeared to be drizzled with balsamic vinaigrette was not for me. I’m not going to make a definitive statement about it because that might just be my personal preference that I do not particularly enjoyed grilled watermelon.

The standout of this dish was the house biscuit and with warm peach jam.  More like peach and mint jam!  This has never come up become in my blogs but let it be known from the moment that I hate jelly, jam, or anything that has that preservative flavor.  This dislike goes as far as daycare when I refused to eat peanut-butter and jelly sandwiches.  Gross! Oddly enough, I don’t mind Jell-O.  Don’t judge me.  However, this peach-mint jam could make a believer out of me! The biscuit itself was fantastic though it was served like pieces fallen apart from the biscuit. The biscuit had a lot flavors of butter and a salt from that of a Parmesan cheese.  When I took a piece of the biscuit and dipped it into the jam, fully expecting to be grossed out, I was not at all.  The peach mint jam had a fresh taste and the mint flavor added to the biscuit was spectacular.  I ended up calling a server over to take the biscuit away because I did not intend to enjoy it that much and I did not want to overdo my diet-free dinner that already included fried chicken and peach cobbler. But let it be known that the house biscuits and peach mint jam was amazing! If you order a dish there and it does not include the biscuit and jam, it can be added as a side for $6.

Finally, I ended my meal with peach cobbler and vanilla ice cream.  Again, it took quite a while for this dish to arrive.  When it did, the peach cobbler were served in a small cast iron skillet with a scoop of ice cream piled on top.  The trip from the kitchen to the table melted the ice cream a bit which was slightly disappointing because it did not allow me to taste the peach cobbler without a remnant of cream. Overall, the dessert was ok.  The peaches slices included the skin which was an unusual texture. The flavors of sweetness and cinnamon were there but the skillet was so hot that it was still cooking the cobbler.  Let’s get say, I’ve had better.

There was a level of cool I really enjoyed about the restaurant that would draw me back for another visit.  The food itself was tasty and the customer service was friendly though the parking situation was frustrating.  I spent $45.58 and after a 20% tip, a total of $53.58 altogether. However, I am almost craving that pork belly and those Brussel sprouts so I need to make my way over there soon. The following is my Seven Mac Score for the restaurant:

Please look out for my next post as I review another one of Baltimore’s Best and attend the Baltimore County Food Truck Trifecta Festival.  Also, you can find me on Instagram @finediningdiva and twitter @moderndaybeauty. Also, if you would like to follow my blog to receive notification when a new blog is posted, please send your email to finediningdiva@gmail.com.