A coworker and I went to Happy Hour on H Street in DC after work one Thursday. I had never ventured there before but it is apparently a pretty happening area in DC with a few historical sites as well. We started at this spot called Redrocks which calls itself a Neapolitan Bistro but the happy hour crowd was a little weak and the items available for Happy Hour were running out. So we enjoyed our drink and walked down to & Pizza. I mentioned that I really wanted to go there because I had heard about how delicious it was from several DC natives. One person in particular mentioned a garlic pizza with shrimp. Sounds pretty good to me!

Once we entered the spot, located at 1118 H Street, NE, Washington DC 20002, it reminded me of that super modern-urban décor with concrete, metal, the exposed ceiling, and wooden tables that has become a trend in the food industry. Just picture the décor at Chipotle and one of my NYC favs Kobeyaki. It is almost like a sterile feeling but the food is good so you just go with it. We stood in line for about 5 minutes and I watched the process. I was slightly intimidated but the lady at the counter was friendly and worked with me.

They are very similar to Chipotle in that you can decide to order their popular pizzas, which they make in front of you, or you can create your own. While the lady is assembling the pizza and placing the ingredients, you can choose to add or take away anything that your heart desires. The choices are almost endless from three different dough options including gluten free, several cheese options, and an abundance of protein and vegetable selections. After she finishes building your pizza, she loads the pizza into the moving oven and takes the next customer. Once the pizza is finished cooking, approximately 3-4 minutes, the pizza is sliced and finishing touches are added. This includes more cheeses like goat, feta, Parmesan, and moon; herbs, oils, sauces, seasonings, and other veggies. They literally thought of everything! 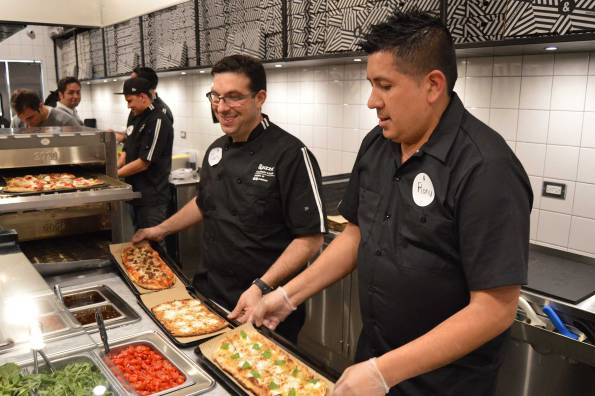 Because of the rave review of the garlic pizza from my friend and the coworker I was dining with, I decided to order that. It is actually called the Gnarlic pizza ($9.32) located on The Hits section of the menu. The Gnarlic pizza is labeled as “More than A White Pie,” and includes garlic ricotta, mozzarella, grilled onion, pesto, garlic sauce, and Parmesan cheese. I was told to add the cooked shrimp ($2.27) to the pizza so I did that and also added spinach. I was a little shy because I did not want to ruin it by getting something unusual and not being able to fully enjoy it though I do not remember getting pesto. Darn! Once it came through the oven, I added the garlic sauce, olive oil, Parmesan cheese, lots of basil, and sun-dried tomatoes in the corner.

Even the pizza box was so cool! Since the pizza was more like a flatbread, it was a rectangular box and that had a cool design on it. Very modern and chic. While the pizza was cooking, I paid the cashier and basically waited around the pick-up area and watched other pizzas come out of the oven and get their finishing touches. After getting my pizza, we were able to get a seat and enjoy the pizza right there.

I was anticipating this intense garlic flavor and was a little underwhelmed with my first bite. I enjoyed the flavors overall but I was looking for more garlic. Like maybe if they added minced garlic directly on the pizza and baked it, I think it would have been perfect. Because the pizza had cooked so quickly, that crisper crust and the char on the toppings that I enjoy was not there and the pizza was a bit soggy. Because I got shrimp, they gave you just enough for one on each slice. However, it was a whole shrimp and that made it hard to enjoy it on every bite. In addition, the shrimp were not very well seasoned, probably in an effort to allow them to be used on any type of pizza but, I almost did not feel like they belonged there. They really did not add anything to the dish overall but maybe could if chopped and more seasonsed. The sun-dried tomatoes were a nice addition and well as the basil which I love. And don’t misunderstand, I enjoyed the pizza but I also found things that I would consider for my next visit. Perhaps keeping the shrimp but adding a salty protein like pepperoni or bacon would give some additional flavor. Also adding goat cheese or feta would also take this pizza to another level. Below are a few other pizzas: 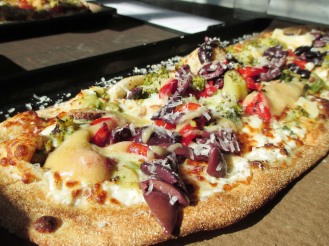 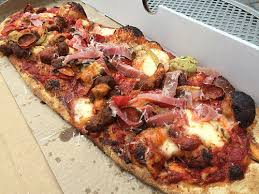 The portion of the pizza was satisfying but I did not leaved stuffed. There are a few other pizzas that I would love to try that have some awesome ingredients. Overall, I really enjoyed myself and will venture here again. I even learned that there is a location in Baltimore in the Federal Hill neighborhood which is pretty close. My pizza totaled $12.75 and I decided to pay for my friend so I spent $25.50 altogether. They have locations in DC, Maryland, Virginia, and one opening soon in Philly. If you are looking for a cool causal pizza spot with fresh ingredients, & Pizza is the place to go. The following is my Seven Mac Score for the restaurant:

Please look out for my next post as I discuss my Sprinkles cupcakes experience! Also, you can find me on Instagram @finediningdiva and Twitter @moderndaybeauty. Also, if you would like to follow my blog to receive notification when a new blog is posted, please send your email to finediningdiva@gmail.com.