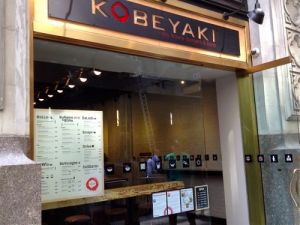 On our third full day in the city, I decided to get lunch at one of my favorite Japanese fast food locations in Chelsea.  We were not planning to get to the US Open until after 1pm for a match we wanted to see, so I decided to get dressed early and walk the 7 blocks and 1 avenue to get to the restaurant at noon when they opened. I discovered this place during a work trip about 3 years ago when I was placed on a 3-week assignment in New York City.  During one of the intermittent weekends, I decided to stay in a hotel in Chelsea on 26th street. After I checked into the hotel, I decided to head west and found myself walking on 7th avenue.  Kobeyaki is located between 26th and 27th street. After a brief look at the menu, I ordered and fell in love. 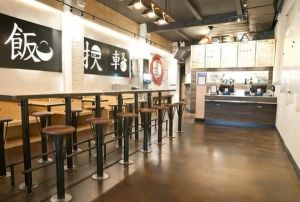 Kobeyaki is located at 293 7th Ave, New York, NY 10001 in Chelsea.  The restaurant utilizes a fresh approach to Japanese cuisine by providing creative and delicious Japanese food in a fast casual environment.  This environment is the new dining trend similar to that of &Pizza and Chipotle where they create a sterile environment with metal and wood.  They specialize in Rolls, Bowls, Burger & Buns, and Salads & Soups.  During my first visit, I got the Ramen Noodle Soup ($8.97) which included braised pork, scallions, ginger, nori, togarashi pepper (a Japanese seasoning staple), sesame seeds, and tempura flakes.  During that cold December night, that soup hit the spot. Something about the combination of pork and scallions that really satisfies me.  It was my first time being introduced to fancy Ramen other than the Top Ramen I enjoyed as a child and in college. The braised pork was delicious and the flavors of the soup came together so wonderfully.  I took the soup and a bun (I’ll explain later) back to the hotel and enjoyed it in my room and was seriously disappointed I did not order something else. The food was spectacular. 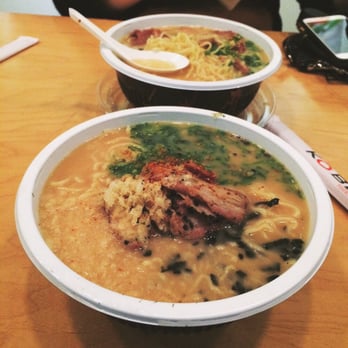 Something you should know about me is that if I really really enjoy a restaurant the first time, I go back another time in an effort to see if that experience was a fluke or if this a normal course of business. I went back for lunch the next day at 11am but they were not open so I went to a burger place next door.  They have some really odd operating hours on weekend and don’t open until noon and close fairly early.  However, I went back for dinner later that day and I am happy to report that the enjoyment and delicious food was consistent. And I have been back several times since, have even eaten in the restaurant, and have always enjoyed my food every time. Which brings me to my most recent visit as a food blogger.

I will admit that I slightly overdid it during my recent visit. There was so much I wanted to enjoy and share with you. My mother doesn’t eat fish so this was a trip I would have to enjoy alone. I remembered really enjoying the Soft-Shell Crab Bun ($10.35) which includes crispy soft shell crab, crab meat with Japanese mayo, unagi sauce, and spicy mayo. As I write this out, that sounds like a lot of sauce and mayo. However, the seasonings and flavors come together so wonderfully!!! This bun was put together perfectly with so much love and attention to detail, it was hard to put it down. First of all, they used every part of that bun.  Typically, when I order a sandwich, I take a part of the bun off and only enjoy one half of the bun. That was impossible here. The crab was centered in the middle of the bun and was topped with fresh greens, carrots, and cucumber (that I omitted) with a delicious sauce on top. Underneath the soft-shelled crab was the crab meat with the Japanese mayo that was similar to a crab salad that added additional flavor to the bottom bun. And once I took a bite of this sandwich, I remembered why I love this place. The picture I took did not do it justice so I downloaded their nicely presented photo. Their attention to detail is phenomenal.

In addition to the bun, I also ordered the Shrimp Tempura roll ($9.66) and the Spicy Tuna Roll ($9.66) both without cucumber. I could not just decided on one so I got both. The shrimp tempura roll included avocado, ginger carrots, tempura crunch, scallions, spicy mayo, and unagi sauce. This roll was presented beautiful and covered with both sauces and scallions on top. The roll does not really need soy sauce but the added flavor is definitely a plus. The spicy tuna roll included avocado, tempera crunch, sweet and spicy sauce, and scallions.  This too was a delicious roll that had wonderful flavors that did not require the use of soy sauce. The one disappointment of the rolls was that they were cut really thick which made it a bit hard to eat. Still did not stop me though. At some point, I began to get full and decided to only eat insides of the roll with the fish and shrimp and leave the rest behind. During my next visit, I want to try the Spider Roll ($10.35) because it basically includes all of the components of the bun but in a roll. How could you go wrong?  One important note is that this is not a restaurant to get your traditional raw sushi from. They have a lot more cooked sushi options than raw so if you are seeking a purely sushi restaurant, you may be disappointed. 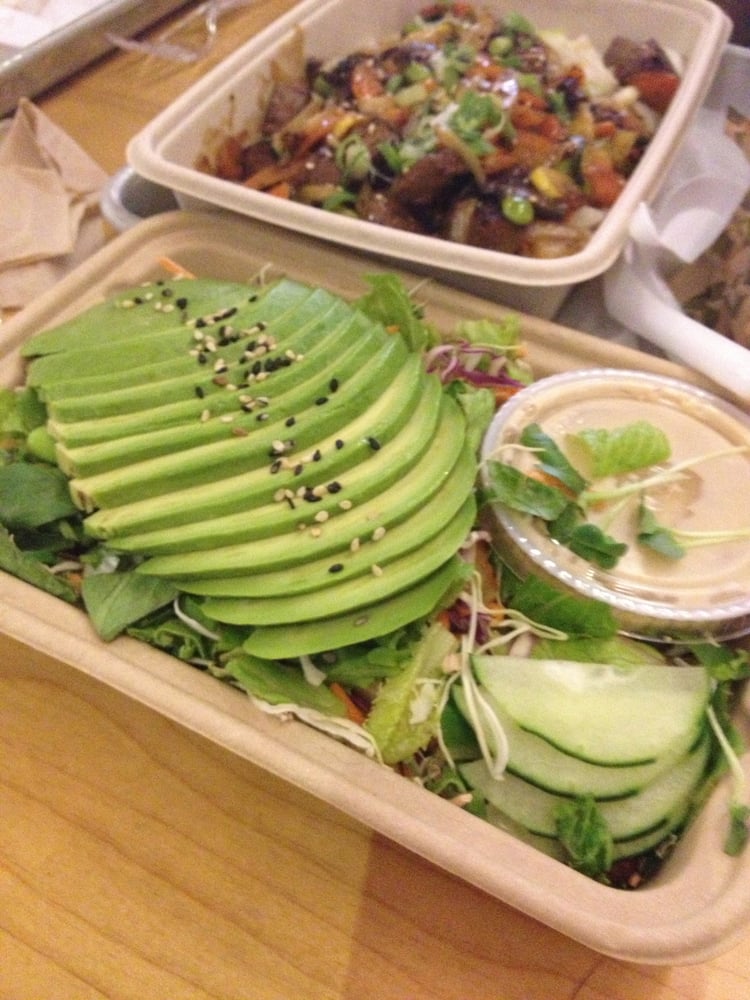 It would have been so wrong not to bring my mother back something to eat so I decided to get her the Green Salad ($7.81) which included avocado, edamame, romaine lettuce, scallions, cabbage, cucumber, carrots, crispy noodles, and creamy ginger dressing.  Because my mother is a carnivore like I am, I got her a side of teriyaki chicken to add to her salad which she greatly appreciated and took the salad price to $10.81.  Her salad looked really fresh and the half of avocado on top presented very beautifully.   She really enjoyed her salad and mentioned that even while the dressing was creamy, she still very much enjoyed it.  She would definitely order that meal again if she could.

Overall, this will always be one of my go-to places for a quick delicious meal.  They have now opened multiple locations to include restaurants in Bryant Park and the Upper East Side.  During my most recent visit, I spent $32.30 on my three items and then went back for my mom’s salad which totaled $11.75 after taxes. All money well spent. The following is my Seven Mac Score for the restaurant:

Please look out for my Part III of the NYC Dining Series as I make my way around the City and explore some of my favorite places!  Also, you can find me on Instagram @finediningdiva and twitter @moderndaybeauty. Also, if you would like to follow my blog to receive notification when a new blog is posted, please send your email to finediningdiva@gmail.com.