My longtime friend and I wanted to have a girls’ dinner and catch up this past Sunday and decided to meet up at Grille 620 located at 11099 Resort Road, Ellicott City, MD 21042 in Howard County.  She agreed on Columbia and I figured that Ellicott City was right next door that it would not be a problem but this restaurant is located on the out skirts of the city but somehow still qualifies as a part of Ellicott City. The restaurant is within an outdoor shopping center with a Harris Teeter grocery store so there is an abundance of parking. From the freeway, you see the back of the restaurant but there is not a sign to let you know which building it is.  However, it is the one on the end of the row. As you approach the restaurant, you get strong smells of grilled steaks and meat. Love it!

We made a reservation for 6:30pm and found our way in a moderately dimmed, packed restaurant filled with a lively bar area with large tvs and a decent size dining room. The hostess was very welcoming during our visit and made sure we were seated right away. However, our waiter took nearly 10 minutes to greet us and take our drink orders.  We did not immediately notice it as we were deep into the menu and catching up but at some point, it was a bit strange that people were walking around us but no one stopped to acknowledge us or say that someone would be with us soon.  By the time the gracious server arrived, we were pretty much ready to order. He apologized for the delay and explained his situation. In his defense, he was very welcoming and mentioned that he did not get our ticket until a few moments before he arrived which leads me to the common issue with teamwork and communication within the staff.

My friend ordered the Gold Rush ($10) signature cocktail that included Pikesville rye whiskey, Domaine de Canton (a ginger liqueur), and fresh lemon juice.  She enjoyed her cocktail but was not necessarily in love with it.  I went for my usual Sparkling Water bottle ($5) special with lime.  I was quite impressed with the cost of the large bottle. For our starters, she ordered the Steak Strips ($10.95) and I ordered the Crab Napoleon ($14.95).  The steak strips were these thin cuts of steak that were seasoned with Asian flavors and had distinct char marks.  The meat was also served with a mustard aioli that was flavorful.  We both thought the steak was had great flavor and was moist having been cooked at medium well. My crab napoleon starter was not adequately describe in the menu.  It says it includes avocado, cilantro lime emulsion, and corn coulis.  What does that even mean anyway? When I asked, it translated to guacamole with crab and a corn sauce on the side. Example of them doing too much! Anyway, this appetizer was incredible and was quite filling to the point where I could have been satisfied with that alone for my meal.  The crab in the avocado was a welcomed twist that was fresh and added a wonderful flavor, the cilantro and lime enhanced the crab flavor and the corn coulis tasted like cream of crab soup that is one of my favorite soups ever! I was quite happy with my meal so far. My friend could not finish her appetizer so she requested a box but the restaurant has a box-your-meal service where the servers do it for you. My issue with this is that I like my food to be put in the box a certain way and this guy just basically dumped the food in the box! That was a huge negative!

For our main meal, my friend order the Lobster Risotto ($26.95) that included crab saffron risotto and poached lobster tail. The price of this dish bothered me because they gave you a large lobster tail and the impression that lobster would be throughout the dish but it turned out to be crab, a cheaper meat. So, this is slightly annoying. My friend really enjoyed her meal and was very satisfied with the entire experience of trying something different than her usual filet mignon. I decided to stick with my healthy eating and ordered the Honey Miso Salmon (22.95) served with wild rice salad.  I had been craving the miso salmon dish from the Cheesecake Factory but after reading the nutritional facts, I was turned off.  I was happy to have found this healthier version that was still as flavorful but not full of salt and calories.  The portion of the fish was generous but the entire dish did not warrant the price.  I also was disappointed that I was able to switch my side dish of the wild rice salad for something else.  The wild rice salad was not for me and I did not enjoy it at all.  It was described by the server to include garbanzo beans, dried cranberries, corn, and a few other things that I just did not want with my salmon.  When it arrived, it rice was brownish and just did not look all that appetizing but tried it anyway and was still disappointed.  I would recommend having the rice separately because the fish was served on top of the rice so I had a hard time getting my fish away from the rice.

To supplement for the not so pleasant side dish, I ordered the charred Brussel sprouts ($7.95).  The server mentioned that this was one of his favorite side dishes so I went for it. The Brussel sprouts were good and cooked the way I prefer them, however, the dish was made for a person who does not appreciate the taste of Brussel sprouts.  It was cooked in heavy sauce that again was flavorful but was unnecessary if you enjoy the taste of the Brussel sprouts alone. I ate half of my meal and requested the rest to be boxed and again, the server just dumped the food in the box. After he left, I was able to move some things around and make it look more presentable. Oddly enough the next day, the flavors of the miso and honey had disappeared from the dish when I reheated it. The fish was still moist but I was a little bummed with the lack of flavor.

For dessert, my friend ordered the Brownie Sundae ($8) served with chocolate syrup, caramel syrup, vanilla ice cream, and walnuts.  She requested the walnuts be omitted from the dish which was easily accommodated. Her dessert include two squares of brownies piled on top of each other with the scoop of ice cream on top. The presentation of the dessert was wonderful and the taste of the brownie was everything you could want! I ordered Chocolate Chip Bread Pudding ($8) which was another one of the server’s favorites.  The bread pudding was served with limoncello sauce and fresh strawberries.  This bread pudding was spectacular.  I only ate a fourth of it and decided to give it to my friend to take home to her mother who we knew would know it.  But the flavors of the dessert were incredible.  If anything, I go back to the restaurant for the appetizer and the dessert and be very happy.  Again, the boxing of the dessert was an issue as I wanted the dessert to sit up as it was served and the server again just dumped it in the box. And when I attempted to do it myself, he made a fuss about making him useful which I could appreciate if more attention to detail was taken to make sure that the food looked presentable. 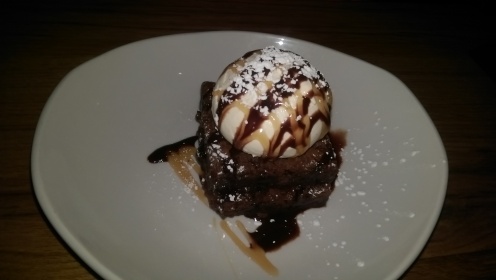 Overall, we had a pleasurable experience minus a few hiccups with customer service.  Another issue was noticed was the service trays were left in the middle of the walkway for ridiculous amounts of time and required guest to have to walk around them in an already tight dining room.  And other servers would see them in the way and not attempt to assist another and get it out of the way. So that mixed with the horrible plating of the to-go boxes was a disappointment.  We spent a total of $121.94 and decided to split it evenly for an individually total of $60.97 and after tip was $72.97.  While I enjoyed my meal, I cannot honestly say that I would drive out of my way to visit again. I think that if I was in the area, I may, but it would be rare.  The following is my Seven Mac Score for the restaurant:

Please look of my next post as I share more dining experiences in and around Baltimore and DC, and my trip to Los Angeles.  Also, you can find me on Instagram @finediningdiva and twitter @moderndaybeauty. Also, if you would like to follow my blog to receive notification when a new blog is posted, please send your email to finediningdiva@gmail.com.